The Man Behind Bioflex Laser Therapy and The Clarification of Controversy – Class III vs. Class IV Lasers 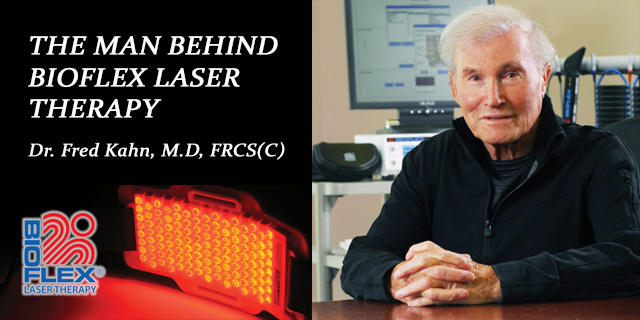 Dr. Fred Kahn, M.D, FRCS(C) is the man behind Bioflex Laser Therapy, a recognized leader in the field of light therapy Dr. Kahn has developed a light therapy system used to eliminate pain, accelerate healing and restore the quality of life for patients suffering from a wide range of medical conditions.

Dr.Kahn is also the CEO of Meditech International Incorporated.

The article below hopefully will permanently put to rest the inappropriate claims made for the efficacy of Class IV vs. Class III or IIIB Lasers. The article clearly delineates the controversy utilized in advertising these forms of Laser Therapy which creates significant confusion for begineers attempting to find their way in the field of Laser Medicine.

Dr. Jan Tuner’s objective summary of this matter should clarify the facts involved and enable clinicians to make appropriate choices with regard to the therapy systems they acquire for optimal benefit to their patients.

The use of low level lasers is increasing in medical applications. This treatment modality offers several advantages by promoting wound healing, reducing inflammation, edema and pain. But for those thinking about adding a low level laser to their clinic, it is wise to look for unbiased information before any investments are made.

There are many different lasers on the market with different wavelengths, different combinations of wavelengths and output power. Most of these lasers are in the so called Class 3B, meaning lasers with a maximum power of 500 milliwatts (mW). Lasers with higher power are in the Class IV and having powers between 501 mW up to 15 000 mW (15 W) or more. The classification has nothing to do with the therapeutic effects but is solely based upon the risk of retinal damage. Which type of laser is then the best buy? To answer this question, we need to look at some facts.

Manufacturers of Class IV lasers often claim that the high power increases the depth of penetration into tissue. This is not correct. Several of these lasers have a 980 nm wavelength, and the penetration of this wavelength is considerably less than that of the more conventional 808 nm wavelength. Since the penetration at 980m nm is poor, this means that there is more heat buildup at the skin. And laser phototherapy is not about heat but about photochemical reactions. As for the high power, it causes no increase of the penetration depth. The study by Joensen et al. [1] showed a static depth of penetration of 810 nm over time. It is true that high power quicker produces more photons at the level of the maximum penetration, but this is not necessarily beneficial. Studies have shown that low doses and long time is more effective for the reduction of inflammatory processes [2], whereas high power and short time are inhibitory. Inhibition is actually a part of LLLT. By using high energies, the pain transmission in nerves is temporarily slowed down [3]. This is a useful option in many situations of acute pain. But on the other hand, the inflammatory background of the pain is also inhibited and the actual healing is slower.

Another aspect of the depth of penetration is the heat produced by strong lasers. This is particularly a problem in patients with dark skin or dark hair. The therapist needs to use a sweeping motion over the target to avoid pain. With a non-contact technique you lose upwards of 50-85% of the incident light through reflection and back-scattering from the skin [4], which means that only 15-50% of the light leaving the laser aperture is actually making it into the tissue. A Class3B laser does not cause any pain reaction due to heat, so it can be used with contact and with pressure. With contact, more light it forced into the tissue. And by using pressure, blood, being the main absorber of the light, is reduced in the area and the light can more easily penetrate the ischemic tissue. The pressure will also lead the laser probe closer to the target. Thus, a Class 3B laser can penetrate deeper into tissue than a Class IV laser and can therefore saturate the target faster. The heat buildup by Class 4 is negative and some manufacturers add cooling to the beam. Others offer pulsing to allow for heat dissipation. The latter actually lowers the energy, so the suggested advantage of the high power is contradicted.

Proponents of Class IV lasers often claim that a larger area can be treated much faster. A cluster of Class 3B lasers can do the same thing and with the advantages mentioned above. The target area of physiotherapeutic problems is frequently rather small in size, but certainly often larger in chiropractic procedures. However, it does not necessarily take 15 W lasers to cover large areas. The goal of such therapy is to identify the precise locations of the problems and to apply a sufficient energy to that area, rather than to cover a large area and hope for the best.

Class IV laser manufacturers often claim that this type of laser saves time. It ain’t necessarily so, as Porgy sings. In the epicondylitis study by Roberts (6) the time spent was 5 minutes. Using a 3B laser in firm contact over tender points and a sweeping motion over the actual condyle (being very superficial), sufficient energy at the targets can be applied in 2-3 minutes. The authors swept over an area of 45 cm2. By spreading the light over a large area, using a wide beam area and irradiating from a distance, the dose became 6.6 J/cm2 and the power density only 22 mW/cm2, which is very low. So in spite of using 10 000 mW and an energy of 3.000 J, the power density was low and the time long. This shows that high power does not necessarily save time.

In the study by Kheshie (7), Class 3B and Class IV lasers are compared in their potential efficacy on knee osteoarthritis. At least that is what the authors and the average reader would believe. However, this is another case of apples and oranges. The “high intensity laser” disperses its light over a large and not well defined area, but quite large. If supposed to be 100 cm2, the intensity would be in the level of a regular LED, 15-25 mW/cm2. Hardly within the known therapeutic window. In comparison, a 3B cluster of 4 x 200 mW laser diodes with small apertures (= high local intensity) is held over the patella. Not a very good approach for knee OA, but what is worse is that the laser was held stationary for 30 minutes! This is bioinhibition, for sure! (Around 1500 J over a knee). The conclusion of the abstract is: “HILT combined with exercises was more effective than LLLT combined with exercises, and both treatment modalities were better than exercises alone in the treatment of patients with KOA.” Yes, obviously, and two inadequate protocols managed to result in positive outcomes. Says something about the potential of LLLT. But it says nothing about any advantages of Class IV over Class 3B lasers. And the flaw cannot be identified in the PubMed abstract due to shortcomings in the reporting of parameters.

Summing up, any Class IV laser used within its limitations can be a positive addition to a clinic. However, there are several therapeutic limitations and a suitable Class 3B laser can do whatever the Class IV laser can, and at a lower cost. Low level laser in itself is very rewarding, so keeping to the facts should be enough to impress any customer. 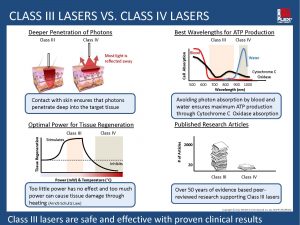